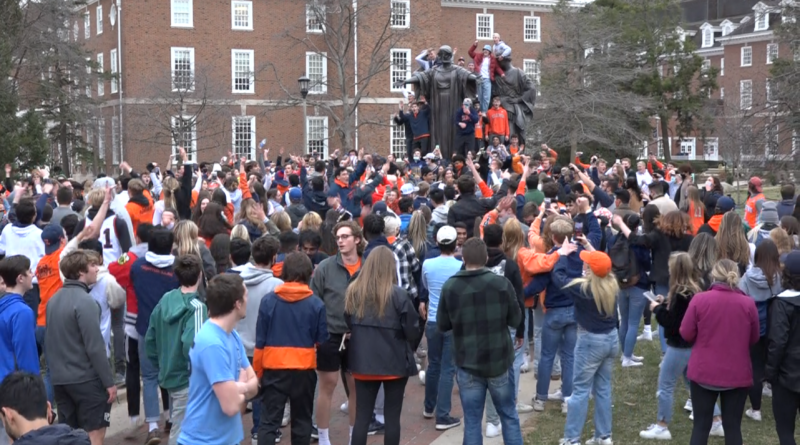 That’s what Illini students were feeling on Sunday after Illinois defeated Ohio State in the 2021 Big Ten men’s basketball tournament championship. In the minutes after the game ended, they flooded out of their apartments and Green Street bars and into the heart of Campustown. The crowd celebrated at Alma Mater before moving to the Quad and then back to the intersection of Sixth and Green, where students celebrated into the evening.

Passing drivers and their passengers were just as jubilant as those on foot, honking their car horns and pumping their fists out of the windows as they drove by. The Altgeld Chimes played Hail to the Orange among other celebratory songs as the crowd celebrated near the foot of the bell tower.

An outpouring of joy like this hasn’t been seen at the University of Illinois since November of 2016, when the Chicago Cubs won the World Series. For a celebration of the Illini, it’s been an even longer wait.

Several revelers, including student Pierre Azar, described the atmosphere of Campustown that day as being “electric.”

“You can see what this means to the city,” Azar said of the celebration. “It’s been a 16-year Big Ten championship drought and after finally getting it, the city’s alive. It hasn’t felt like this in so long. It’s amazing.”

With hundreds of people taking part in the celebration, it was likely the largest mass gathering to occur on campus in the last year because of COVID-19. The pandemic was likely the last thing on the revelers’ minds on Sunday as there was virtually no social distancing between individual members of the crowd. While many revelers did wear masks, just as many either didn’t wear a mask properly or wear a mask at all.

“We won and that’s all that matters,” said one reveler.

The university has yet to respond to the celebration and what implications it may have regarding a potential outbreak on campus in the coming weeks.

The celebration at Sixth and Green lasted for several hours, during which the intersection was completely inaccessible to traffic. Numerous cars had to make U-turns, often times running over the sawhorse barriers that the crowd had knocked over in the celebration. The barriers had been in place to prevent illegal parking in Green Street’s center turning lane, but by the time the night was over, all of them had been damaged or destroyed. One was even thrown atop a traffic light at the intersection.

Champaign police were on the scene throughout the evening and no arrests were reported. By 8 p.m. the crowd has dispersed and the intersection, despite being littered with debris, was reopened to traffic.

Away from the Campustown crowd, Phi Kappa Psi hung a championship banner outside their frat house. Kam’s, where many revelers watched the game, raised their banner on Friday, before Illinois had even played a game in the Big Ten Tournament. In the days since the game, championship aparallel has gone on sale at the Illini Union Bookstore, Gameday Spirit and the Athletic Department’s official online store. 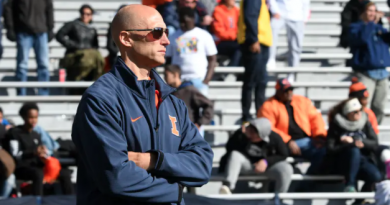 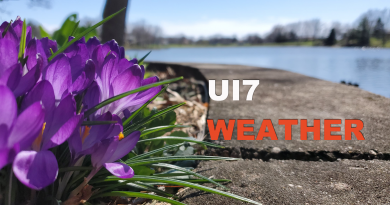 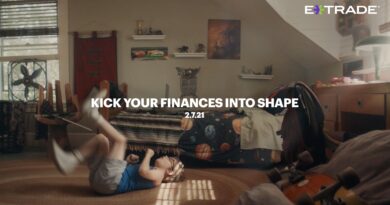