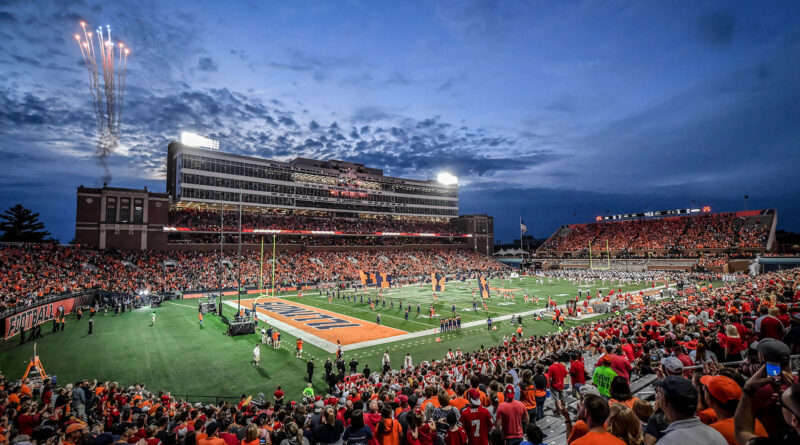 Friday kicked-off Illinois’ Football season against Wisconsin and Block “I”, the official football student section hosted their first Watch-Party at Memorial Stadium. Students were socially-distanced on the field and watched the game with their friends. John Sullivan, Vice President of “Block I” wanted to provide an environment where students could watch the game together, while also abiding by COVID precautions.

“As a community is everything I’d honestly say pre-COVID I think I did not look at it the same way as I do now,” said Sullivan. “I say right now I just want to have a positive environment and like having people around you that like all support the cause, such as the football team, like having a positive fan base, that really appreciates them and cares about them.”

Before Block I received approval to have a watch party, and because of the Big Ten Conference’s COVID-19 regulations, fans were not allowed to attend the game.

Gabriella Vaquez, a senior in the College of Media, said she was devastated when she heard the Big Ten update.

Despite the announcement, UI sports organizations had other plans. John Sullivan, vice president of Block I, said as soon as they heard the announcement, they began to think about alternatives for students to gather. Originally, Block “I” planned to host a watch party on September 3rd to relay old games.

“The schedule was released late against Wisconsin. We kind of jumped on it, took the opportunity, and we kind of started from there,” said Sullivan.

With the help of the Division of Intercollegiate Athletics, the Big Ten approved Block I to host watch parties for away games. Students show negative tests results from their Safer Illinois App upon entry. The organization will continue to host the events as long as the weather permits.

Gabriella Vazquez said that finding community during COVID-19 is what matters most.

“Day in and day out, during the hard days, and really, really good days and supporting that team and making sure that the team knows that we as the fans love and support them,” said Vazquez. “We are going to cheer for them no matter what.”