The future of professional and collegiate athletics hangs in the balance due to COVID-19.

“I think we’re in a little bit of a fortunate situation,” said Rayfield on Thursday. “I feel deeply for my colleagues who are spring sports coaches.”

The Fighting Illini capped their second consecutive winning campaign last fall. With the upcoming season starting in August, this off time has a cost.

“What we tried to do is to maintain the momentum that we had in the spring. We were preparing for the fall already,” said Rayfield. “They’re being creative in ways that they can develop both as athletes and students.”

It’s not just the #TPChallenge, in which soccer players juggle a roll of toilet paper. Workouts consist of running and, in the case of rising senior Maggie Hillman, drilling with siblings.

“I actually have a sister who is also a D-1 soccer player,” said Hillman. “It’s really nice to have somebody right next to you who has to do the same stuff.”

Maggie and Abbey — a rising sophomore at Loyola-Chicago University — have been able to do touching drills as well as strength conditioning together. In most cases, strength workouts turn competitive, Maggie says.

“It really allows us to perform to the best of our abilities.”

The main drawback of the innovative individual routines is the lack of spring games. In accordance with the NCAA, soccer teams are allowed five spring competition dates. However, Rayfield says the group had just one game. The other four dates were being saved for later in the spring when the weather was warmer and competition could be outside.

Considering how the winter and spring sports were affected, Rayfield is mindful of the larger impact on soccer.

“We certainly missed out on our spring competition,” said Rayfield. “Relative to missing out on a competitive season and the championship, it’s a much better situation I guess for us to be in.” 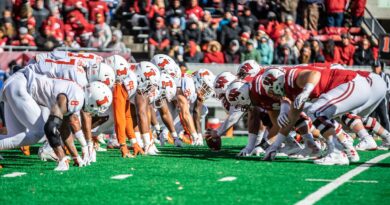