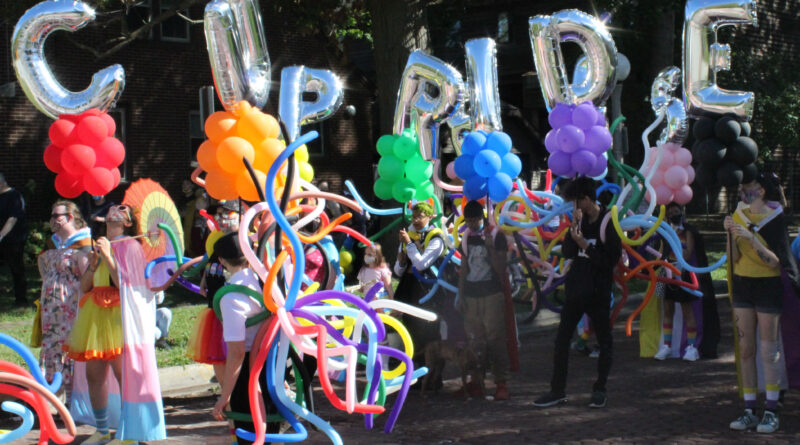 Rainbow candy, rainbow leis, and of course rainbow masks are just some of the goodies given out at the Champaign-Urbana Pride Fest on Saturday. Champaign resident, Cindy McKendall watched the parade and attended the following events at the Pride Vendor Fair as well.

“I’ve been to pride in Chicago, and I’ve seen a pride parade in Toronto and I happened on one when I was in San Francisco in the ’90s. It is much more family-friendly here,” she said.

Noticing a stark distinction between now and the way pride was perceived back in the ’80s, McKendall recalled, “I didn’t really know anybody who was out in high school. Once I got to college, I started meeting people who were coming out. In fact, one of my best friends came out summer of 1993 to me. The whole notion of people being out and proud was really not there back then.”

A celebration of inclusion, the pride parade and subsequent events look very different this year from how they have in the past.

“I don’t mind it because I have kids and I’ve been taking them to pride parades since they were little, but it is a little bit different than it used to be,” McKendall continued, “I saw someone carrying a sign and this is so true that the first pride was a riot, so the fact that it’s a thing for the families to do on a nice Saturday afternoon is very different.”

Saturday afternoon was not the only time for participation. All week long, the campus and CU community alike have held events leading up to Pride Fest. From auctions to workshops to clothing swaps, the weekend drew to a close, finishing with a drag show, a hike and a closing party at Nola’s Rock Bar. Acting as parade Grand Marshall this year was public health administrator Julie Pryde. The vendor fair included performances by Peach of the Midwest Carrington, DJ Silkee, Anika Emily as well as many others.

Has college football’s pandemic season been a failure? Basically, yes.