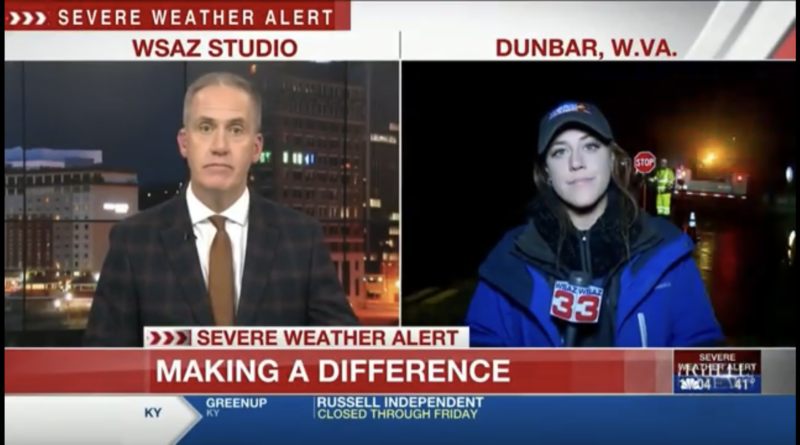 The video of a West Virginia reporter getting hit by a car during a live report went viral, sparking debate among TV journalists and viewers about the industry’s working conditions.

On January 19, 2022, the 25-year-old WSAZ-TV reporter, Tori Yorgey was covering a water main break in Dunbar, on a Wednesday night, moments before being hit by an SUV live-on air.

The video shows Yorgey being hit from behind and pushed out of frame, while her camera is knocked to the ground.

Yorgey is heard saying, “I just got hit by a car, but I’m ok, Tim,” referring to the anchor in the studio and assuring the viewers that she is good, while re-adjusting up and refocusing her camera still on-air.

While Yorgey has been praised for continuing with her live shot, the incident received backlash from broadcast journalists and viewers, blaming local TV stations for sending out reporters to cover stories on their own and not hiring camera operators.

Alison Davis Wood, lecturer in the department of journalism at the University of Illinois, said most local TV stations don’t have a lot of extra money to hire more crew:

It used to be that you would go out as a reporter with a camera person, now cameras have gotten smaller, the equipment is easy to carry and set up and that’s wonderful… but the other side of that is, it’s kind of given an excuse to news directors to be like ‘here, here’s all the stuff, and you can go out and just do it by yourself.

Wood also talked about the one-man-band practice, an industry habit, where TV reporters, often multimedia journalists, are assigned to do a live delivery in the field and set up the camera, doing everything themselves, in order to save costs for TV stations: “She (Yorgey) had nobody else to help her. So she didn’t have anyone to be looking out or helping direct traffic behind her,” Wood said.

While Wood said that Yorgey was doing everything right, staying off the road and paying attention to her surroundings, she said solo live shots can be risky.

“ It can be a hazard of the job that when you are working as a reporter and you are out there by yourself…sometimes you get focused on what you are filming and what you are reporting and kind of forget about the danger that might be around you,” Wood said.

Wood, who teaches newswriting, intro to TV production, video reporting and storytelling and an advanced documentary class, advises her students to trust their instincts in potentially dangerous situations when they are reporting alone and to think about whether the story is worth taking the risk.

“Don’t get so caught up in reporting the story that you are not aware of the potentially dangerous situation that you might be in,” Wood said.

Wood said the one-man-band practice will continue in the future and she added that the pandemic has also contributed to the stress on the reporters as they lack support when they work from home or do everything on their own.

That is why, the department of journalism is training students “to learn all of those skills – video and audio and writing and editing,  photography. We want them to have a lot of tools in the toolbox so that they have all those skills that they can present to a news director,” Wood said.